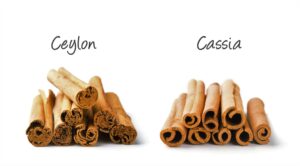 Cinnamon, the world’s most favored spice has multiple benefits from being an anti-oxidant power house, to it’s anti-inflammatory benefits. Hmm…, that’s not all – it is also known to protect your heart, improve mental health, help in stabilizing blood sugar levels, fights bacteria and bring magic to your oral hygiene!  It’s got quite a list…, but Cinnamon amidst it’s history are of different types.

Colorado State University lets us know that, the cinnamon you usually see in the grocery store is most likely one of the cassia varieties of cinnamon, so it’s possible that you’ve been using Vietnamese cinnamon sticks, powders and oils without realizing it. Cassia cinnamon varieties are often cheaper than true cinnamon.

True cinnamon, or Sri Lankan cinnamon is considered to have the most complex and delicate flavor among all the types of cinnamon, according to the authors of the March 2014 study published in the Journal of Agricultural and Food Chemistry.  It’s important to note that the unique flavors of many English and Mexican desserts are attributed to this variety of cinnamon.

Saigon or Vietnamese cinnamon, is believed to have the strongest flavor. The essential oils within the cinnamon bark gives it its signature aroma and flavor. The strength of the aroma and flavor is dependent on how much essential oil the bark has. Studies have shown that Vietnamese cinnamon sticks usually have a higher cinnamaldehyde content than the other varieties of cinnamon, giving them the strongest flavor.

All varieties of Cinnamon are rich in nutritional and health benefits. However, cassia varieties of cinnamon, including Saigon/Vietnamese cinnamon, have higher levels of a compound known as coumarin, which can damage your liver if you consume it in large amounts.

So next time you are headed to the grocery or health shops, ask yourself, ” is it a Ceylon or Cassia today?

Ugonwa’s® is a specialty retail (online and store-front), with a great variety of African-Caribbean top-quality, kosher/halal meats and fishes, wholesome staple foods and produce, as well as authentic Afro-Caribbean fashion and Arts. Our niche spans across North America and the global market.

We use cookies to ensure that we give you the best experience on our website. If you continue to use this site we will assume that you are happy with it.AcceptPrivacy Policy